My Injury Made Me Stronger(Turning Setbacks into Comebacks) 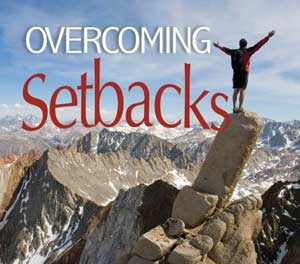 I always though that I would be writing about my road to running my first marathon; however this is not the blog I thought I would be writing.  In October of 2014 I made a decision that I said I would NEVER do and that was I would train for my first marathon. For those that know me, running has become a very important part of my life as of 2013. I trained for my first 5K in 2013 and have been running since all the way up to my first half marathon in 2014. There is something about being around other runners that makes you feel like anything is possible, so I knew that this would be one of the most challenging goals I would be preparing for.  I convinced my running partner to join me in this journey and we agreed that we would go for it… 26.2 miles, YIKES!!!!Before you knew it I registered because I knew that I wouldn’t allow myself to be talked out of it.

So I started my journey and started my training. I was disciplined, consistent and determined to run this race I scheduled for May 3, 2015. I made sacrifices when I didn’t feel like running, I ran in the cold, on the treadmill, and before I knew it I was hitting miles I never knew I was capable of meeting.  Well, shortly after I had trained to run 16 miles, the unexpected happened, which is why I am writing this post today. On one of my training runs in March, I started to have this nagging pain around my hip/groin area, but like I often do, I chose to run through the pain. Well, that was the beginning to the end….but I talked myself into believing that if I only stretched it would feel better. Well I continued running and continued to feel pain, a decision that I now wish I had been wiser about. During this time, I was still running half marathons and would limp myself to the finish line.

And then it happened, on my 20 mile training run, which was the last and longest run before tapering back on my mileage it happened. I was in excruciating pain and because I was with my running partner, she could tell I was struggling but I was determined to finish because after all I was going to run this race. There was no way I would let all this training to go waste. But my body just couldn’t cooperate and I had to walk several miles during that run. I became worried and for the first time I started to think maybe this was not going to happen.   Well I decided to see my doctor who eventually referred me to a physical therapist who shared that my hip flexor was just very tight and I would need to work on stretching it daily and build up strength. I was still determined and purchased everything that I thought would heal my hips, I was impatient and  I believed that if I took a few days off and try again, my hips would magically heal. After all I was going to run this race. Well as the time came closer I kept some hope, that it would still happen. I was devastated and it wasn’t until a few days before I decided that I had to LET IT GO. So I made up my mind that even though I would not run this race I would be there to support my running partner.   Boy was it bitter sweet, I was so happy for her but sad for me. I dreamed about hat moment when I would cross the finish line after running 26.2 miles. Yes I said it 26.2 miles…YIKES! I FINALLY came to the realization that I needed to take a break from running because I was only making things worse.

I then knew that part of the problem was this was I so focused on running that I neglected to strength train enough. So I enlisted a personal trainer to help me build my strength and hopefully recover. I also started to incorporate weight lifting into my recovery and I can say it has made a tremendous difference. I stretch, massage, foam roll like it’s nobody’s business. Although I still experience some pain from time to time, I feel stronger and have started to incorporate some running into my routine. I am taking my time and really listen to my body. My body probably looks the best it has looked in my adulthood and I feel the healthiest than I’ve ever felt. As I reflect on this journey I can say that there are some valuable lessons that I hope will be communicated in this blog.

I am one of the most determined people that I know and sometimes we need to know when to quit.

We should always listen to our bodies because it will always tell us when we need to pay attention.

Sometimes we must know that our timing is will not always be in line with the Universe.

There will always be setbacks in life, however there is an opportunity to recover and become stronger whatever the setback is.

So I know that this is a self imposed setback and acknowledge that we aren’t speaking about an illness or something worse. However for me, it was still meaningful. I still have some half marathons that I scheduled prior to getting injured and have had to forgo some races as I recover. I’ve given up my bib to someone who was ecstatic to run a race I couldn’t and that in itself was a blessing. Will I train for another marathon, perhaps but in the meantime I will have gratitude for the experience and continue to strengthen my body and slowly build up my miles. My injury is making me stronger and I plan to take it one mile at a time.